You know those computers from the 1950s you’ve seen pictures of? The ones that filled whole walls and ran on punch cards?

Well, to the 14-year-old who you’re going to be hiring in 10 years, that’s kind of how the computer setup in the standard modern office looks. From the Windows operating systems on the screens to the computer towers set awkwardly on the floor below the desks, the whole thing seems absurdly clunky.

Of course, right now, that 14-year-old’s use of technology centers on text messages and Xbox games, but when she joins the workforce in a few years, she’ll expect a work machine that exudes power while taking up almost no space.

Google is doing its best to make that vision a reality with the Chromebox and Chromebook, machines that are not so much computers as portals into Google-land. 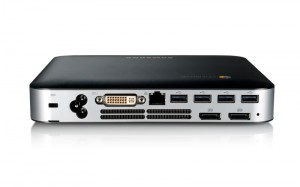 After years of racing to give businesses and individuals bigger hard drives with more memory, Google and other technology companies have decided that’s not what we need at all. Instead, the expectation behind the Chrome devices is that we’re online all the time, so we can work and play in the cloud.

With the Chromebox or Chromebook, you have instant access to everything you’ve saved on Google Drive, which Google hopes will be all your documents. The company markets its Google Apps to small businesses as a way to replace their servers with effortless cloud storage, documents that offer access to multiple employees, and shared calendars. Of course, Gmail and Google Chat are also part of the package.

Aside from getting rid of all that old hardware, the attractiveness of this model lies partly in escaping the hassles of administering your own IT systems. Google archives your documents and email based on your retention settings and offers options to help keep you protected from audits and lawsuits. It also makes sure your data is backed up and that the roof above your server isn’t leaking.

It also makes your documents accessible from any device, which means that in 10 years that 14-year-old will be able to use whatever technology is current then (Computer watch? iNecklace?) to work from anywhere.