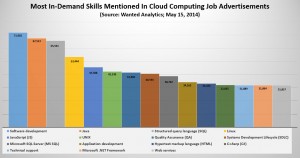 New figures on cloud computing employment reveal where businesses are most focusing efforts today. The information, which was compiled by a Forbes contributor using Wanted Analytics’ dashboard, scanned all cloud-related jobs and found certain areas are generating more employee demand than others.

Software dominates cloud job postings, with the top job postings during the survey period being software development and JavaScript. Structured Query Language (SQL) and Linux are also in high demand. The high number of software development postings is in line with the rapid growth of Software-as-a-Service (SaaS) solutions in most industries, as businesses grow more comfortable with using cloud-based solutions.

Cloud hosting providers are the top employers seeking cloud workers, with Amazon heading up the list. Microsoft follows, with both companies competing aggressively for the best in the business. Both companies often recruit recent college graduates to their respective campuses where they’re encouraged to help create innovative solutions to meet business needs today. In addition to cloud hosting providers, major corporations like Deloitte, Lockheed Martin, and Northrop Grumman are regularly seeking large numbers of technology workers in the cloud services sector.

Washington, D.C. is the most popular candidate location among employers, but there is also a high candidate supply in that area. New York City and Seattle, Washington also have both high supply and demand for cloud technology jobs. Perhaps most interesting is that areas like Santa Clara and San Francisco, California, and Baltimore, Maryland have a higher demand for jobs than candidates to fill them. This shortage could mean good news for current graduates but bad news for the companies relying on cloud services in those areas.

As cloud computing continues to become a part of business today, demand for skilled professionals will only continue to increase. These trends show that software is a large part of how businesses are using the cloud today, but will software continue to dominate well into the future? Or will infrastructure take over the demand?

Cloud computing is a growing part of business today, with Infrastructure as a Service (IaaS), Platform as a Service (PaaS), and Software as a Service (SaaS) seeing tremendous growth. At a recent webinar presented by SmartBooks CEO Calvin Wilder and ComputerSupport.com’s Kirill Bensonoff titled, 2014 Cloud Trends Every CFO Needs to Know, Chief Financial Officers across the country learned essential facts about cloud computing today.

Salesforce.com, Google, and Microsoft are leaders in SaaS, with all three cloud services being used by many businesses today. As 2014 begins, however, there are a few emerging cloud players, including Desktop as a Service (DaaS), which experts predict will become a serious player in the industry this year. Other emerging cloud players include file-sharing service Egnyte, virtual datacenter DinCloud, Java PaaS company CloudBees, and sign-on service OneLogin. For the financial sector, a debate is ongoing as to whether SaaS is better than Terminal Server. NetSuite and QuickBooks are both popular SaaS services, leaving each business to determine which service works best for them.

Amazon Web Services, a leader in IaaS, is driving price changes throughout the industry. From 2006 to 2014, AWS has cut its prices more than 30 times, with 2013 bringing an 80 percent price drop in some instances. To remain competitive, Microsoft Azure and Google both cut pricing–a move that benefits the consumer market tremendously.

So how can your business take advantage of these price drops? One way is to realize it isn’t all about the price. Businesses must look at which company offers the best Service Level Agreement (SLA), what the SLA covers, and whether or not the SLA has “teeth.” Minimal downtime should be a top priority for businesses, with businesses looking at the history of any service to determine which service will be the most dependable.