From now until April 30th, 2013 customers who buy a retail copy of Office 2010 or one of several stand-alone applications will receive a download of the Office 2013 or the 2013 version of the stand-alone.  In a few instances, you can even get a free one year subscription to Office 365.  The offer is called the Microsoft Office Pre-launch Offer.

There’s no need to fear.  Microsoft has done this many a time before.  They did something similar with Office 2007 and the release of Office 2010.  The only difference this time is that there is a choice.

Should you choose to buy Office Home & Student 2010; you’ll be able to choose an ever-green license or a year of Office 365 Home Premium.  The 365 subscription will let you install Office on up to five Windows devices.

Beware though, if you have Office for Mac, there will be no upgrade for you.  You’ll simply get one year of Office 365. 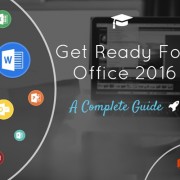 Get ready for Office 2016 - A Complete Guide

Windows XP End of Life – Are You Prepared?

How to close ports using Windows Firewall for Windows Vista/7