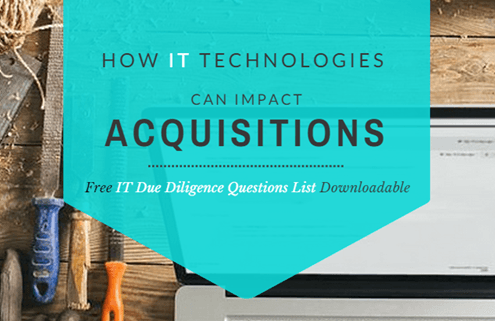 We’ve all seen them. A large corporation announces a merger with another company. Others are acquired. But what is the one component other than financials that can cause the new relationship to head south?

Technology. Specifically IT services of both companies. No doubt, there are many reasons why mergers and acquisitions are beneficial. The obvious enticement is in staffing consolidation. When two companies dovetail their assets and manpower together it nearly always comes with a reduction in work force. However, the economies of scale can’t be ignored from a profitability perspective.

How Can IT Unravel A Deal?

Back in 2005, Ebay made a  move to purchase the mega-giant Skype for $2.6 billion. Their tactic was to integrate voice and video into the Ebay auction experience. But what they didn’t do was market research of the communication preferences of their core members: online sellers and buyers.

Instead, Ebay soon realized very few of their loyal users cared nor had interest in speaking with other members. Apparently, the privacy of email prevailed and probably will forever. By 2009 Ebay’s plans to dominate the auction industry would not include voice and video communication and eventually they sold Skype for a loss at a $1.9 billion price tag.

Often, takeovers are driven by stock prices and valuations. However, it’s interesting to note that many acquisitions head south due to both cultural differences and poor management structures according to Forbes. In the 2006 Bank of America’s acquisition of Merrill Lynch, failed due to culture class between the two companies. It’s this human element that is often impossible to predict.

So what factors can you control? Technology.

Remember, any successful merger requires a baseline of similar IT infrastructure to make the transition seamless. It’s this technology curve that often attracts these partnerships.

Successful merger requires a baseline of similar IT infrastructure to make the transition seamless.

For example, in 2014 Comcast acquired Time Warner Cable for $69.9 billion because both cable TV and Internet providers shared a common technology bond in their consumer services products. Thus, it was a viable endeavor to consolidate their market share as well as technologies.

We recommend considering these core issues when evaluating whether a merger or acquisition makes sense for your organization:

The obvious reason why acquisitions occur is to buy the competition and it’s customer base. However, when a deal is being negotiated, it’s common for both sides to minimize how their IT will support its customer service and solution offerings. Big mistake.

Granted, gaining access to new customers to sell your existing products and services to will appear lucrative. However, there are many indicators such as remote server maintenance, data integration as well as CRM software implementation which can impact how both sides service customers. Sometimes IT support such as data centers can be impacted when two companies become one entity.