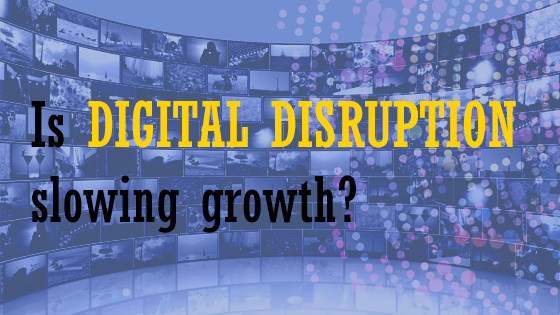 We are living in an era when new technologies and companies are emerging and are defeating behemoth corporations that used to dominate. When you look at the news coming out of the world of business you will see a lot of activity: new start-ups, promising advances in technology, better efficiency in businesses and other positive news. Yet when you look at the stats from a global or even a country’s perspective you cannot see the growth. We haven’t really entered an era like the 90s again even though we have even better communication technology and infrastructure.

Growth is happening, but within industries

Our industries might not be growing in size but they are changing completely from the inside out. Look at the hospitality industry; we went from having hotels where you could do reservations online, and then AirBnB came in and disrupted the whole model. Hotels are experiencing lowered earnings and if you looked at the hospitality industry the numbers seem to go downwards. Airbnb is taking their customers, however it is important to note that those customers are still there, they are just spending their money in a different manner. Instead of going to hotel owners, the earnings are going into the pockets of homeowners. The same is true for taxis and Uber. Uber has increased the number of people traveling in hire cars but has reduced the business of the taxi industry. Right now we are at the stage where disruptors are appearing and upending old businesses with better approaches towards work.

This doesn’t mean we wouldn’t grow in the future. Look at our social media landscape; there was a time when MySpace’s dominance seemed absolute, but now it seems nothing can defeat Facebook. MySpace won because no one else was providing social networking like it was. Once it set the standard for social networking, other companies rose to it. Uber and Airbnb may be disrupting the taxi and hospitality industry, but their reign won’t be forever. More companies are starting up to deliver competitive services to these two which will end up leading to a lot of growth on the long run.

Whenever a place of business is being renovated there is some loss of business. If a retail company decides to create better stores they will have to run some downtime to upgrade from the old to the new. We are right now in this stage of technology. People’s jobs are going away to automation, yet people aren’t ready to work in the new ways that have opened up. Being your own boss is now much easier to do than it was one or two decades ago. Online commerce allows any of us to start a business selling what we are good at. Disruptions have not caused a growth right now because people are still learning to deal.

Many of the internet ventures being started these days are not being started by millionaires; anyone can open a small shop on the internet without needing a major investment. Websites that allow people to sell their products and services are growing day by day. Remember; there was a time when having a factory job or farm job was the norm for most people. We went from factories employing most people to most people working in offices, and now we are shifting towards most people working for themselves. It is going to be a bumpy ride but the payoff we will start getting in a few years will be huge.

Economies will adapt, they will have to

Many people question how we will be able to adjust the changing technological and economic reality to our current way of working. As automation keeps taking jobs away we need another way of providing for people. Futurists and economists have known this for a long time; if we were sufficiently advanced we could reach 100% unemployment. We can eventually replace all human workers with machines and artificial intelligence. This might happen in 50 years from now, but it will happen.

How does a society operate if no one works in it? Will we form a utopia where we don’t have to work anymore? One of the answers to questions like these is basic income. That means that the government will pay all of its citizens’ money just so they can go out and spend it to stimulate the economy. Many countries have started debating basic income; Switzerland even put it to a vote (where it failed to pass).

The future is going to be very different. Growth in the future might mean less jobs, not more.

3 Microsoft Azure features you need to know about

Digital transformation: The impact of digitalization
Scroll to top