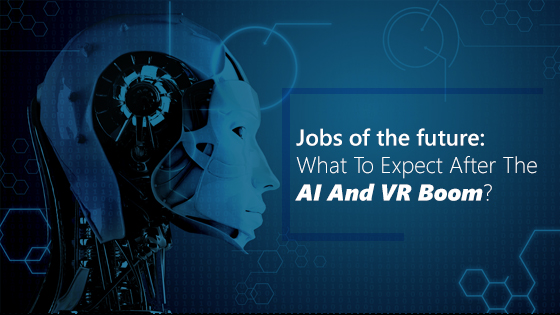 Artificial Intelligence and Virtual Reality are no longer just science fiction concepts – they are becoming a part of everyday life. You can go out and buy the HTC Vive or Oculus’s Rift to experience VR right now. You can use IBM’s Watson through their public cloud. These two technologies are so revolutionary that a book in their demand is almost inevitable. This is going to eliminate many old jobs, but will also generate new generation type of jobs as well. Here are some changes we can expect:

Analyst jobs will be on the decline

There was once a time when companies used to hire a lot of mathematicians and bookkeepers. Their job was to make sure that reporting was done correctly, and to prepare reports for executive management. It was normal in big corporations to have a reporting department that crunched numbers and analyzed trends from it. All these jobs are already mostly gone – aside from the analysts. Computers are doing a much better job of storing and processing data than humans ever did. They have, in the previous decade, also beaten people when it comes to forecasting, as well as analysis of the numbers listed in the reports. The reason we still needed human analysts is that computers do not understand the business world. They could tell you what the numbers represented, but could not place the results in the context of business. Artificial intelligence will definitely be able to do this and may be a better analyst than any person could ever be.

VR will lead to a designer boom

VR will lead to an increase in VR developers and coders – that much is obvious. What isn’t so obvious is that VR also creates a lot of new employment opportunities for designers. We will see the first virtual architects – people hired by the wealthy to design custom virtual reality spaces. Companies will also be hiring a lot more architectural students in order to create their own virtual spaces for marketing purposes. It is going to be a good time to be an architect or designer. Universities have already started offering courses for such careers and it is almost a guarantee that this will be a lucrative career in the future. Artificial Intelligence will also not be a problem for such careers for a long time – we are barely at the stage where AI can replace a human being at logic. Replacing a human being at creativity is too far away.

Data Collectors will be the new entry level job

AI can do a lot with data, but it still needs assistance in data collecting. Virtual Reality can also depict real world places to anyone but someone needs to record the information in the proper format first. We will soon see the rise of people who work as human data collectors. These people will be tasked with mapping out different areas and collecting information with specialized devices. They will probably be paid by how much data they collect. It will be a fun job that will probably be tackled by people new to the workplace.

3D printing is another technology that is becoming cheaper and more accessible every day. The issue is that 3D printing isn’t going to be easy for the normal consumer. Everyone may be able to afford a 3D printer but not everyone can design an object to be printed in 3D. This will result in the rise of 3D engineers and tailors. The engineers will be employed by companies to come up with novel solutions to their problems and to create devices that can be easily printed with 3D printers. Tailors, on the other hand, will be offering services to the everyday public. We are sure they will come up with a cooler name than tailor but right now that is the best term to define the job. You will be able to go to a shop and tell them what you need. They will then design something according to your specifications.

AI and VR promise to change our societies forever. Think about all the changes that happened due to the internet and computers. Something similar will happen again except this time the changes are going to be much bigger. AI, VR, Automation, and 3D printing is going to completely change the way we handle

Moving to the cloud? 10 things to expect during the migration
Scroll to top