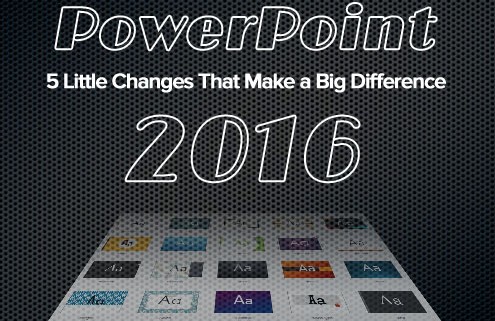 Microsoft has been on a major role following its announcement of introducing the Office 2016 release. The bundle of applications promises greater collaboration and communication as well as more sophisticated use of security features. Microsoft has also made a number of changes to its PowerPoint software. Users would often have had spent considerable time testing multiple slide elements to produce the effect they desired. However, significant improvements are set in store for users in the 2016 edition and Microsoft has gone to great lengths in offering customers exceptional user satisfaction.
In this blog, we share 5 changes that Microsoft has added to the 2016 PowerPoint software, which are noteworthy.

Microsoft PowerPoint users suffered from being unable to put together a quality selection of slides for their presentations. Luckily, Microsoft has listened to the anguish of its customers and has responded with a remarkable new feature known as ‘Designer’. This helps users choose the best slide layout and designs based on the type of pictures they insert into PowerPoint.
This gives the advantage of saving you hours of browsing through multiple colors and designs of slides to create your perfect presentation. With Designer, all you do is press a few clicks, and you will be satisfied with your slides in a matter of minutes.
Chris Maloney, PowerPoint’s senior program manager, spoke about how the new Designer feature is dedicated to saving substantial time in creating presentations. He mentioned, “We can give you this option that would have taken like 30 clicks, and we give you five of them. So right there, that’s like 150 clicks, and all you have to do is try them on, see what you like, and then just be on your way.”

We can give you this option that would have taken like 30 clicks, and we give you five of them. So right there, that’s like 150 clicks, and all you have to do is try them on, see what you like, and then just be on your way

Adding a number of different animations to allow your slides transition from one to the next seamlessly can drive anyone to go insane. But with Morph transition, a new feature from Microsoft, the process of making smooth transitions and animations has just got incredibly easier. With Morph, you can benefit from seamless and subtle transitions without having to work with frustrated eyes till past bedtime. All you need to do is to use two slides with at least one object in common. Then go to Transitions and then select Morph to view automatic animations and movements.
However, this feature is only available to those who have subscribed to Office 365.

‘Tell me what you want to do’ for quicker actions

One of the many defining things you will notice when using 2016 PowerPoint is the ‘Tell me what you want to do’ ribbon on the top menu. Hover over it and you will see there is a text bar, in which you can type any words or phrases pertaining to an action or information. With the ‘Tell me’ feature, you can quickly access tools in far less time instead of having to manually take the long course of going to different tabs.

We have all grown used to using bar graphs and pie charts on Microsoft Excel and Word. But little did we expect Microsoft to add six new chart types for data representation purposes in PowerPoint. Yes! Clear and concise data visualizations are the key for effective business presentations, and with the addition of six new graphs, you can easily impress your employers through your presentations.
To make use of these charts, go to Insert and then click on Chart. You will then see a variety of data visualizations including Box and Whisker, Histogram, Sunburst, Treemap, Waterfall, and Pareto charts.

Business presentations are not usually complete without their fair share of number-crunching and data. This is why Microsoft brings you the feature to add complicated math equations to help your audience follow through your financial results with far more clarity.

The 2016 edition of Microsoft PowerPoint brings users with a plethora of new features and tools for an overall higher user satisfaction. Each of these features is focused on curbing the difficulty and the length of time taken to make slides and choose animations.

Windows XP End of Life – Are You Prepared?

How the DELL-EMC merger can impact the IT industry

5 Technology Trends to Expect In 2017
Scroll to top