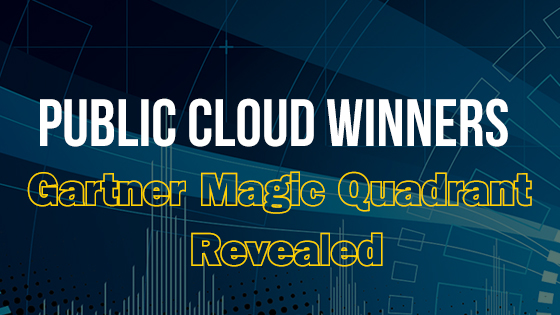 Companies are fighting hard to dominate the market – everybody wants to be for cloud what Windows is for operating systems and what Gmail is for email. The market has Amazon, Google, Microsoft, Alibaba, IBM, Oracle, and AT&T fighting for a larger share. Everyone knows the crowds are up for grabs and are trying to emerge as winners.

The surprising part of Gartner’s report is that AWS is still on top of the game. Amazon has been in the cloud business for longer than most of the competition and is easily the biggest IaaS (infrastructure as a service) company in the world.

Often, the biggest player becomes complacent and allows others to catch up, but that doesn’t seem to be the case with AWS. They are the highest rated cloud company in Gartner’s report. AWS simply has the biggest infrastructure, the most services, and the best integration with other apps right now. No other company even comes close to Amazon when it comes to cloud. You would have to combine several of AWS’ biggest competitors together for them to reach even half the size of AWS.

Alibaba still has a long way to go

Alibaba has made a staggering investment in cloud and is aiming to become a top contender for public cloud services, but it still has a long way to go. Most of their customers are Chinese companies that do not have a presence outside the country at all. It is easy to see why they are able to capture the local market so easily – people love and trust Alibaba in China, and it is a global success story in the tech world. The fact remains that they haven’t really captured a serious market outside of China and need to work harder. In addition, they will also have to fight the negative perception people have of Chinese products and services. Alibaba is one of the most respected tech companies in the world, but people are still wary of it because of their own experience with cheap Chinese products, which is regrettable at times. Anyone who has used any of Alibaba’s services knows how dependable and trustable they are.

Some competitors will have to tap out

Right now, there are 9 companies vying for the top spot in cloud services. According to Gartner’s report, at least two of these will be pushed off the market by 2019. AT&T is one of the contenders expected to drop out because their solution isn’t really their solution – it is developed and managed by EMC. Rackspace has started offering support for Microsoft’s Azure and AWS, which also raises questions about Rackspace’s own services.

What are companies supposed to do if their vendor shuts down? Verizon recently exited the IaaS market but they never had a big share anyway. What happens when a big company like AT&T or Oracle exits the market? Will the companies depending on them be left without an infrastructure overnight? While we are sure that these companies will come up with a solution for users if they shut down, only time will tell the impact of such a move.

3 Ways to Stay Ahead During IT Staff Shortages