Business is constantly changing, but you can see trends if you look closely at the top businesses. While today’s businesses are very different from those about a decade ago, you can see that most of them are concerned with tech and user interaction. If you follow these trends, then you might be able to make your own successful company.

Many of the top emerging companies are innovating mobile integration so that people can easily access information from their smartphones and tablets. For example, Square has made millions of dollars by giving business owners the ability to use their mobile phones as credit card processing platforms. Sproxil is a service that allows people to see if their medication is real or fake by typing in a code found on the bottle.

This comes as no surprise because mobile technology has taken the world by storm, and those that truly embrace this technology are winning. This also gives more power to the consumer.

Today’s major company is bloated, full of middlemen and has very high barriers of entry. For example, it takes millions of dollars to make a major game, and even more to produce a new console.

Ouya is a new console that is fixing this. Not only are most of the games made by independent developers, but all of the games will be free or offer a free demo and the system is only $100. Another major change is that the console is made to be hackable, which embraces a trend that many gamers hoped major consoles would adopt.

Pig Newton is another company that follows this trend. Formed by the comedian Louis C.K., he has introduced a new way of interacting with fans. Instead of going to clubs and major production companies, he offered skits online for just $5. This model has allowed him to sell hundreds of thousands of videos due to the lower price. Decent profit and happy fans, a true win-win.

Business is changing. The major changes are that the customer is really being considered. Instead of having inaccessible and bloated companies, smaller ones are being embraced. If you want to succeed in today’s market, then you really have to cater to the customer. If not, then you might have a hard time competing against these emerging companies. 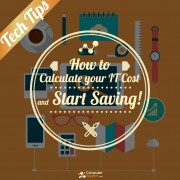 Getting the Most Out of Outsourcing

The Economics of Tech Businesses

Why Choose an IT Support Company?

LinkedIn Endorsements: How do they work?

BYOD: Reining in the Cost

The Long Telecommute to Work

Calculate Your IT Costs and Savings, Now!
1 reply

The Cost of Downtime Will my business run properly in the cloud?
Scroll to top