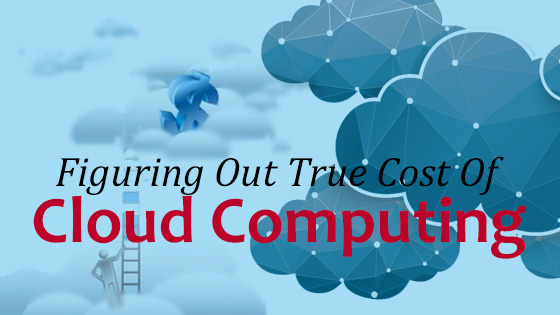 If you think cloud computing is a complex subject, wait until you try to understand its pricing. Managers cower in fear of being asked to manage or predict the cost. If you look for price comparisons between different cloud providers, you won’t find much because the pricing structure is so complex.

Figuring out the true cost of a cloud infrastructure is complex, to say the least. This is a serious challenge for both users as well as cloud providers. As long as the costing is uncertain, there are many businesses that won’t move to the cloud for in fear of hidden or unknown costs. So what exactly is the problem anyway?

Why it is hard to calculate true costs of IaaS?

The inherent design of public clouds is such that it is very hard to calculate the cost of using them. The biggest advantage of cloud services is their flexibility and scalability. You can scale them up whenever you want. You can temporarily use a service if you want to test it out or just have a small task. All this combines to result in a veritable costing nightmare. It is much easier to understand the problem with an analogy.

Imagine that you were driving a taxi. Your routes would be dependent on the passengers. Some passengers will make you wait while your taxi idles, which will add to your fuel costs. There would be no way to predict the amount of fuel you will consume at the beginning of the day. Since you are being hired for a short time, and the destination keeps changing, you cannot predict how much your fuel will cost. You also cannot limit the fuel cost in anyway. Suppose you decide that you will only spend $100 on fuel that day. What happens if your last passenger isn’t at their destination yet and you run out of fuel?

That is why limiting cloud costs isn’t the right answer either. If you can’t really predict how much the cloud services will cost you over the month, why not just set a monetary limit? All you have to do is make sure you don’t use more than the budget.

Except, what if you need to? The whole point of a cloud system is to have extra compute and storage whenever needed. If you were to limit spending on the services when you needed the services, you will be missing out on a lot of capacity.

Cost shouldn’t be your sole focus

So, what’s the answer to the problem? There isn’t one as far as we can see. We’ll give you an example – suppose that you want to choose between AWS and Google. You think you’ll compare them on the basis of costs. Amazon has many different types of virtual machines you can pay for you. Google, on the other hand, will allow you to create a custom virtual machine with as many cores or ram modules as you want. You can choose a configuration that matches that AWS, but the answer wouldn’t really be successful. Even if AWS ends up costing lesser than Google, Google is allowing you to customize according to your needs, which means you will also be able to get cheaper virtual machines in the future if your usage falls.

The only way to truly compare costs is to first create a realistic scenario of how the cloud services will be used, calculate costs of different providers on the basis of the scenario and then make the decision to go with any one of them. This isn’t foolproof either; if this is the first time that your company is using a cloud platform then there will be many uses you wouldn’t even envision before you actually start using the cloud platform. So your answer will still be wrong but it won’t be completely wrong.

Figuring out try costs of public clouds is a difficult undertaking, because things may shift over time and actual usage might be more or less than initially predicted. Use calculator provided by AWS, Google and Azure.

Most common mistakes to avoid in disaster recovery
Scroll to top