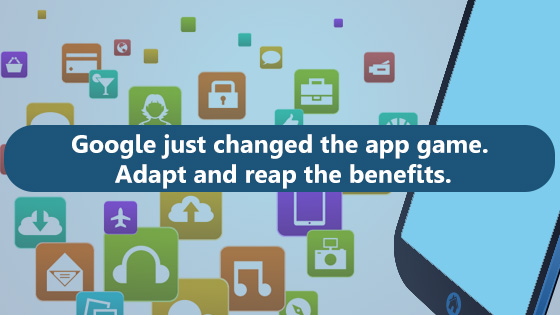 Apps have become ubiquitous in our lives. There was a time when people didn’t know what apps were, and then we were in a phase where people just installed a lot of games on their smartphones. Nowadays, we are living in the age of apps. There are billion dollar businesses that run purely through apps.

Apple gets the credit for the app revolution; they were the first ones to get it right with their app store. Google has been catching up for a long time and is now in some ways superior, but the company is planning a new change which can be a game-changer. Google has very smartly come up with a solution to a problem many customers and businesses face. They are introducing an infrastructure to get apps to run without needing to be installed.

Businesses have trouble getting people to install apps

This is a huge problem when it comes to ensuring that your app is successful. You can build a fantastic app but it will not go anywhere unless people download it and use it. If you are a huge company then you can spend millions of dollars advertising the app and get a few installs. If you are a small company then you can use social media marketing to boost the number of installs you get. No matter what method you choose to advertise your app, you will find out that the impact just isn’t as much as you thought it would be. You weren’t expecting to get a billion installs all at once, but you’d still be disappointed at the results. Why do people not want to install your app? The answer is simple…

People have too many apps installed already

This is the crux of the issue. Every company wants users to install their apps. If we really installed every app that was made by a company whose products we use, we would end up with hundreds of apps on our phones. No one likes to clutter their phones by adding apps they will only use a few times a month. People will install apps they use to communicate with their friends, some games, and apps that provide them services. People will usually not install apps that only relate to one company in a non-app related business. For example, you might not have the app of your energy provider installed, because you know that you aren’t really going to need it too often.

Instant Apps are the answer

Google knows the problem much better than we do. That is why they have come up with a solution that will change the way we interact with apps. Enter Android Instant Apps. The program is currently in its testing phase and Google has already partnered with a few companies to get them started with Instant Apps, but it will be opening up to everyone soon. Imagine if you didn’t have to install apps to use them – that is what Instant Apps is meant to deliver.

You will be able to simply click on a link which will launch the app, even though the app is not installed on your phone. This is a huge deal, and in retrospect, we cannot believe that no one else tried this up until now. This should have been obvious. The requirement for the Instant Apps program is that you need to keep your program as modular as possible. This way, Android will only load the parts of the program that are needed at the moment, ensuring that the app can be powered up instantaneously when the user clicks on the link.

How It Helps You

With Instant Apps, you will have people who would have never installed your apps using your apps. The most basic advantage is that it acts as sort of a demo; you will be able to show people how your app works, and if you impress them, they will definitely be convinced that they need to install the app.

Another big change is that this fundamentally blurs the line between apps and websites. You won’t have to create a mobile website as well as an app. Plus, what if this results in apps coming to the desktop? Apps are free from the restriction of browsers and we are sure this model will translate over well to desktops.

You need to make sure that your apps are designed in a modular manner and also that your security is top-notch so rogue apps do not end up hurting your network or your systems.

Insights from Rightscale 2016 State of the Cloud Report

Why Hackers are now targeting law firms – and what you need to do to stop...
Scroll to top