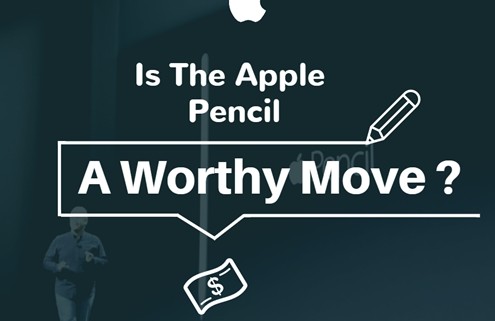 As ironic as it might sound, those were the words of the great late mastermind of credited for much of Apple’s current success, its co-founder, Steve Jobs, when introducing the company’s first ever iPhone back in 2007. In his presentation, Jobs ridiculed other phones for featuring styluses, and his approach favoring finger sensitive touch screen technology set a new standard in the smartphone industry, with many companies following suit.

The late Apple co-founder’s remarked, if, hypothetically speaking, the company decided to introduce a stylus, with the words “they [the company] blew it”. This pretty much ended any speculations from tech experts on the company ever introducing a stylus for one of its products.

However, ever since the words “It’s called…Apple Pencil” were dropped by Apple’s Phil Schiller’s to introduce the  most talked about accessory to its iPad Air Pro tablet on September 9 this month, the company showcased a totally different trajectory to the one favored by Steve Jobs, who would never have approved of the decision to introduce a stylus pen.

Although the late founder never really set a fixed direction for the company and expected CEOs after him to take a different course, the launch of the Apple Pencil along with the iPad Pro Air is set to take the company on a path treaded by competitors Microsoft, with its Surface Pro 3, to cater to a growing business and enterprise clientele. With the sales of iPads falling quarter after quarter, the introduction of the Apple Pencil may prove to be a unique selling point for professional enterprise users.

What the Apple Pencil offers to business and professional users?

With a 12.9 inch display screen along with an advanced A9X chip and 10 hours of battery life, the Apple Pencil may well provide a highly engaging user experience for business and professional users.

The Apple pencil has important uses for engineering and designing uses. With the Force Touch technology, users can feel the natural smoothness and touch sensitivity of the Apple pencil, resembling a lot like an actual pen that allows sketching and drawing work to be done with incredible accuracy. The Force Touch allows the iPad Pro Air screen to sense multiple levels of force sent by the user upon using the pencil so that the fine distinctions of tilting and hard pressing can easily be reflected upon the screen.

This has considerable applications for a wide number of business uses such as designers, engineers, construction workers, doctors, and more. Designers, first and foremost, will be the first to welcome the fine artistry tools that the Apple Pencil provides. Since the touch sensitivity resembles in many ways an actual pencil or pen, designers can draw highly accurate sketches and images. Higher response times, pressure sensitive strokes, and fluid touch technologies all combine into offering a highly artistic drawing experience.

Engineers and construction workers will also benefit from drawing sketches of construction layouts with pin-point accuracy, allowing decisions relating to color and design changes to be made in far less time than otherwise. Apps that are specifically for construction and engineering work will further make the Apple Pencil an important asset for speeding business activities and processes.

Will the Apple pencil be a success?

It is too early to tell how worthwhile the decision to roll out the Apple Pencil will be for the multi-billion dollar technology company. On the one hand, the Apple Pencil offers extremely touch sensitive technology that is ideal for making sketches and images with tremendous accuracy and detail. The stylus pen, argued by some, is perfectly in line with the iPad Pro Air for business and enterprise usage instead of everyday usage, as rightfully disparaged by Steve Jobs. If the Apple Pencil were only to be used for touching and selecting and moving apps, then the negative remarks made by Jobs might hold true.

Apple Pencil shows that the technology giant is willing to cater products to the evolving needs of its customers.

However, although the announcements and potential applications of the accessory seem promising, it isn’t exactly a bold and innovative technology that will redefine professional enterprise usage across multiple industries. Microsoft’s Surface 3 is already a year ahead into the same features and tools that Apple has recently announced and Craft Design Technology’s Brush Pen also offers superior drawing and illustrative work applications for business use even though it might not have exactly received red carpet coverage.

Adobe, Sensu, and Wacom too feature stylus pens with their offerings, making Apple the late entrant to an all-stylus party and not a company that once stood as the market leader for revolutionizing existing modes of communication. This may perhaps be one reason why the late Steve Jobs never intended the company to introduce the stylus to its portfolio.

Nonetheless, the fact that Apple introduced the Apple Pencil shows that the company is willing to cater products according to the evolving needs and requirements of its customers. Businesses are increasingly shifting to cloud technology, remote working, and implementing BYOD policies which promote mobile solutions in professional environments.

Although Apple might have made a late entry to the lucrative opportunity, its introduction of the pencil shows that it is thinking beyond the ideas of its late founder and not living by his words as a gospel truth.

The iPad Pro Air’s release in November will tell how much of a success the Apple Pencil is, but the uses for businesses look very promising.

Get ready for Office 2016 – A Complete Guide