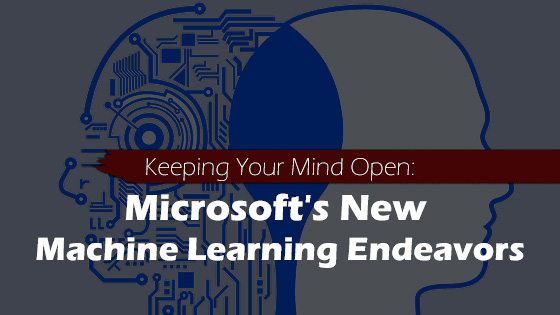 Microsoft is banking big on machine learning and artificial intelligence. There have long been talks about how Microsoft has been stagnating – you will find complains about Microsoft’s lack of innovation in tech magazines from the 90s – but that doesn’t seem to be the case in the last few years. Microsoft may not be besting Apple at phones or Google at search, but that doesn’t mean that they haven’t been busy working on exciting new technologies.

Microsoft has been focusing on machine learning for years

It is no secret that Microsoft is focusing on machine learning and artificial intelligence. Windows 10 launched with a personal assistant similar to Siri called Cortana. Microsoft has also made machine learning available in its Azure product suite under the name Azure ML cloud service. However, in a presentation given by one of Microsoft’s senior execs we could understand that everything made so far is going to be dwarfed by something much bigger.

Qi Lu (the Vice President of Applications and Services at Microsoft) recently gave a presentation at Stanford’s Scaled Machine Learning Conference. The most surprising part of the whole deal is that all of Microsoft’s exciting machine learning initiatives are small boxes in the slide while there is something completely new called the Open Mind Studio on top. If you see the link between the different objects in the slide, it is easy to interpret it as something that brings everything else together.

The Visual Studio of Machine Learning

It also helps that they are calling it the visual studio of machine learning. For those who don’t know, Visual Studio is a development suite for building software, apps, and much more. The important part is that Visual Studio isn’t a language or software – it is a collection of tools that work in tandem to allow developers to create software easily. A lot of Microsoft’s technologies make up important parts of the Visual Studio.

This is going to be huge. Every major tech company out there is investing heavily into machine learning. Amazon, Google, Apple, Oracle, IBM, and many other companies have products based on machine learning available already and have announced further projects as well. However, none of them have hinted at something as ambitious as Open Mind.

If Microsoft manages to release Open Mind in the next year or so, then they will essentially have the only machine learning development studio in the market. This will give them a dominating place in the market and other companies will have to catch up quick.

We have our fingers crossed for a good product. A development in machine learning means better apps and services for us. Let’s see what happens when Open Mind is officially announced.

Staying Safe: 5 Ways to Keep Quadrooter Away
Scroll to top