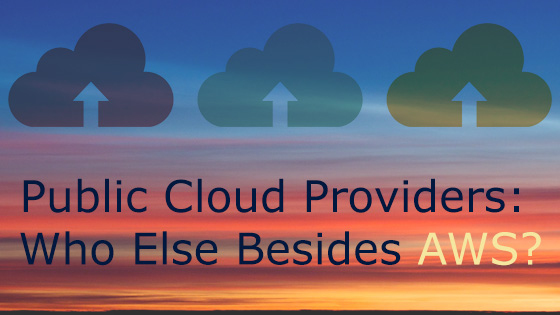 Cloud isn’t the future any more, it is the present. If you aren’t taking full advantage of the various cloud providers and their offerings, you may be left behind. An explosion in demand has resulted in an explosion in supply as well. Many new cloud providers have sprung up, offering new and enticing features in order to capture some of the market share. Here are cloud players and an assessment of what they are bringing to the table.

Microsoft Azure itself isn’t exactly new. It has existed in one form for years. However, up until a few months ago, it wasn’t a complete product. It had cloud features and it could be used as a basic cloud provider but it was not as full featured as AWS. This has changed in the past few months.

What makes it worthwhile now? Instead of just trying to copy AWS, Microsoft is trying to leapfrog it. First of all – the interface of Azure is fantastic. After getting 1996 flashbacks from AWS’s interface design, Azure feels like a breath of fresh air. Instead of focusing just on storage or computing Microsoft is attempting to launch new features and dominate areas where AWS isn’t strong yet. They are offering artificial intelligence services, big data analytics and IoT in a big way. Azure may just prove to be an important player in the future of the internet with its intuitive user interface. Windows 10’s Cortana assistant is also a sign that Microsoft is heavily investing in artificial intelligence.

IBM has always been a bit impervious to competition. No wonder that IBM, a software company, is so successful, while barely any of us remember buying an IBM gadget. There is a simple explanation behind their success – IBM isn’t focused on consumer tech, they are happy dominating the business side instead. Many of us have used IBM computers in offices. IBM also provides many services to businesses all over the world.

IBM’s cloud isn’t as well developed as AWS, but it is bringing promising new things to the field. Like Microsoft, IBM has also been venturing into artificial intelligence and cognitive computing. There’s one major difference – Microsoft had to name their program after a fictional character from the Halo series because they are new entrants into this arena, while IBM’s Watson has been wowing people on television for years. IBM has opened up Watson to businesses and they can use Watson’s services on their own data, AI and deep learning.

Google has been beaten by Amazon in the cloud. Actually, every tech company has been beaten by AWS. No other company has been in the space for as long. Google spent the last decade trying to get people to use its office services like Google Drive and Google Docs, but didn’t realize that need for IaaS. That doesn’t mean they haven’t corrected their course. AWS’s success has made it clear that there is a huge market and Google is coming prepared.

Google has an advantage over the other companies – they have a long history of managing big data for themselves. Google runs YouTube, Google Drive, Gmail, and countless other services. Most people trust Google. They are enticing developers with features like Natural Language API, machine learning, big data analysis, and much more.

There are many cloud providers (and a lot more we haven’t mentioned), make sure you do your research before selecting yours. Moving between clouds may not be a trivial task, and there is a certain amount of lock-in with any vendor.

5 tips for choosing an MSP

A Study on Public Clouds
Scroll to top