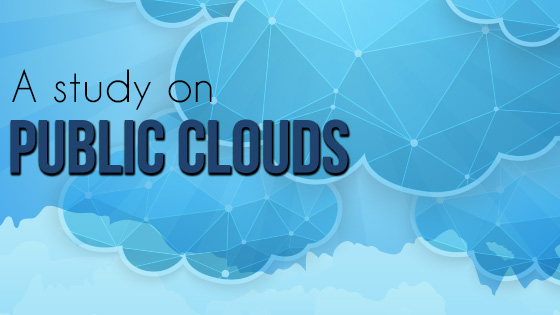 Where the public cloud ecosystem is headed

Public clouds have truly gone mainstream. There was a time when tech publications were filled with promises of cloud and IaaS systems, but that is no longer the case. Cloud computing has become a business necessity for many companies and will become a necessity for many more soon. We have realized that cloud computing is the way forward and the networks worldwide are good enough to handle the demand of cloud services. Media services like YouTube and Netflix are being powered by cloud systems. Flexible subscriptions and plans have allowed even the smallest of companies to start using public clouds. Let’s take a quick look and see where we are headed.

AWS is still the king

There are many public cloud providers active these days but none of them come close to the dominance that AWS has with the market right now. The tech industry has a habit of choosing one product among a category and rewarding it with a disproportionate share of the market. Windows dominates the operating system market. Microsoft office dominates the business. AWS has taken this role for cloud computing, at least for now.

Its dominance is not as absolute, but it is still the undisputed leader in the market. According to reports from Synergy Findings, AWS accounted for 31% of the total cloud market in 2015, while Google, Microsoft, and IBM collectively had a market share of 22%. AWS will continue to be dominant for some time. It is just too good of an offering to just go away and it has been in the market for a long time. People trust AWS.

Gartner released a public cloud report recently, and AWS made their “magic quadrant”.. AWS was the only provider in the Leader quadrant – Google, IBM, Microsoft, and Rackspace were all tied in the next quadrant. Amazon has developed an incredibly vast framework which allows them to provide more services than anyone else – no one else right now has the capacity that AWS has. They are aiming for $10 billion yearly revenues – they aren’t going to be easy to overtake.

Google is a worthy adversary

Google was highly rated in the report as well. Google’s Cloud Platform is exceptionally engineered and it is easy to see why. Google may have entered the public cloud market late, but they have been working with cloud systems for a much longer time. They run YouTube; they were the first email provider to give 1GB of storage for free. They have data experts who know how to optimize systems, and their exceptional engineering is evident.
They are also going for the kill on AWS – they recently announced in a blog post that Google clearly had the best price to performance ration and backed the claim with numbers. They will continue to be a dominating force. Their extra features like custom virtual machines, machine learning, visual and speech recognition have already started winning them clients. They seem to be aiming for specialized services that AWS doesn’t offer, which is a good strategy.

Microsoft is no small player

Microsoft Azure isn’t well represented in the cloud market share as of now, but expect that to change. Sure, Microsoft a marketing leader in search, email, or browsers, but if you look at the world of business, you will see more Microsoft products than any other tech company. Microsoft’s grasp on the consumer has been shaky at times, but they have always had a firm grip on the world of business. Compared to Microsoft, Amazon and Google are newcomers. Microsoft has been delivering services to businesses since the 1970s.
They know how businesses work and they know how to make products that serve businesses well. Microsoft is pitching Azure as the missing piece that connects every other Microsoft product – Microsoft Office, Windows, .Net architecture, and much more effortlessly combines with Azure. Azure even plays nice with Linux, and many of the competitor’s products. Microsoft doesn’t have the best tech right now, but they have a business and sales team better than any other. Do not underestimate them.

While AWS is a clear leader today, don’t underestimate the rivals. There is a reason Azure and Google round out the “Big 3”. When selecting a provider, talk with your MSP or a trusted cloud advisor.

Public Cloud Providers: Who Else Besides AWS?

Public Cloud Performance Comparison – What You Need To Know About the Big...
Scroll to top