In a major nod to a cloud-computing future, Google has thrown its enormous weight behind a series of virtually storage-free laptops running its new Google Chrome operating system (ChromeOS).

The Chromebook, a “thin-client” laptop currently being built by Acer and Samsung, is designed as a leaner, more cost-effective alternative to the traditional laptop, which relies on a large hard drive full of software. All you need for a functional Chromebook is an internet connection.

The netbooks, which retail for between $349 and $499, shun Microsoft’s dominant Windows OS and its lucrative Office suite – including the popular Word, Powerpoint and Excel programs.  Instead, the Chromebook comes loaded with ChromeOS, which only runs a browser and associated programs – its tiny 16BG SSD storage doesn’t leave room for much else.

It’s designed for users to run everything through the Chrome browser, with all office work done online through existing apps such as Google Docs. Documents are then stored online, in the cloud. And that’s where you see some of the real benefits.

Cloud-based storage means you never have to worry about losing the laptop itself — it’s simply a way of accessing your information online. You could access and edit those same documents from a replacement Chromebook, or any other computer with an Internet connection. If you trust your cloud host, you never need to worry about losing data again.

Check back next week for more on Google’s Chromebook and ChromeOS. 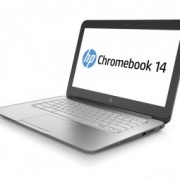 Battle in the Cloud: Microsoft vs Google

The Value of VOIP for Small Business – Part Two.