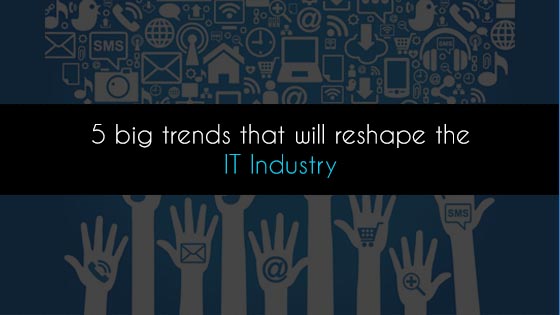 Most industries are afraid of disruption and resist change. The IT industry is the opposite; it isn’t afraid of the change, it was created by change, and it embraces change accordingly. IT is also often the industry which is causing disruptions in other industries. There is always the possibility that some new technology or method will end up disrupting everything out of nowhere but there are some foreseeable trends as well. Gartner is the leader when it comes to analysis and reports of the IT industry and they have outlined a few trends which they are already seeing the effects of. Here are the 5 biggest game changers that are on the horizon:

The Thread that holds IoT together

IoT is often classified as an industry that is more of an offshoot from IT instead of being a part of it. The problem is that the industry is failing right now due to a lack of standards. The whole point of the Internet of Things is to have everything inter-connected to deliver a supreme experience to the users. This isn’t happening because every company is trying to setup their own standards and create a walled garden for their products. This is limiting the rise of IoT and has become a major roadblock for customers. People do not want to invest in IoT devices because they know that changing standards may make their devices obsolete.

IT has a lot of history with making things work together and if the IoT doesn’t come up with a standard soon, IT will have to step in. We are already seeing the start of services that, instead of selling their own IoT devices, are helping users connect IoT devices that use different standards. The IT industry may end up making the layer/medium that allows IoT to exist and this has the potential to be a huge industry.

IT has long been treated as something new by the world of business but those times are over. The importance and use of IT is necessary for management to understand now. This has already resulted in a lot of changes and will continue to change the way the industry works. There was a time when most IT workers were simply ‘developers’. We are now seeing job requirements for roles such as IoT strategist. There are also companies that have created the role of ‘Strategy Architect’ for their IT department, a wholly different role than System Architect. These new roles will continue to be created as business managers understand IT and its potential better.

The demise of data centers

Data centers used to be a necessity for any moderately sized company. Now they may be turning into an obsolete part of the business and one that will be used only by companies with special requirements. This has largely happened due to the rise of cloud storage and services. The reality of the situation is that most companies are not handling very sensitive data and do not require the extra speed delivered by an in-house data center. They can get by perfectly with a cloud platform. There will always be companies that need data centers – financial institutions, law offices – but your standard office will not need one anymore.

Edge computing (also referred to as fog computing) is the latest technology that is reshaping IT. Edge computing is the opposite of cloud in most cases. Cloud services depend on the servers handling the processing and analyzing work while the devices essentially act as carriers. Edge computing rethinks this arrangement and increases the speed of the whole network. If every device on the network is computing as much of the data that it can the gains in speed are phenomenal. Instead of communicating with the cloud and waiting for a response, more work is being offloaded into the devices, and sometimes being sent to the cloud after being processed.

IT driven by business

Thanks to the increasing understanding of IT by management, the role of IT within organizations is growing. The CTO is now just as important as the CFO. Companies are taking a much more nuanced approach to integrating IT services and increasing the amount of control they have over IT. On one hand we have small-medium sized companies outsourcing more than ever, because they know that only an MSP can provide them the services they need. For these companies having in-house IT teams is not economically viable. Medium and larger sized companies are swinging the opposite way.

There are a lot of other changes coming as well. No one can really predict the IT industry or where it will be headed in a few years, but we can have an idea of what is in store of us to a degree.