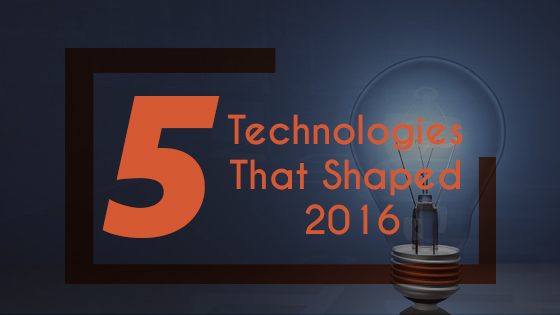 2016 has been another great year for technology. We were amazed by some of the innovations that came to light. Let’s look at 5 technologies that made the greatest contributions in shaping the year.

2016 was the year when Virtual Reality left the realm of science fiction and became a reality. You can go out and buy the Oculus Rift or HTC’s Vive and experience virtual reality right now. The technology is something which people have been waiting decades for. The one word we will use to describe the technology is ‘amazing’. The experience of using VR for the first time cannot be explained in words. You wear the goggles and open your eyes to a new world. It is disorienting at first and also completely unbelievable. There are still a few issues in the current VR headsets but we are sure they will be ironed out in future versions. VR is also fun to show to all your friends and family. Their amazed reactions are enjoyable.

The Internet of Things is finally a reality. The smart home products released in 2016 made it possible for people to see what the hyped technology is all about. Currently, Amazon has the most intuitive IoT device with the Amazon Echo but customers have lots of other choices too. We knew IoT would eventually become a norm, and 2016 is the year when it finally happened. You can buy IoT devices for cheap now and we will soon be seeing these devices everywhere.

People were waiting for Bitcoin to become the next big thing, but surprisingly enough, the technology backing Bitcoin seems like it will play a much bigger part in the future than Bitcoin itself. The blockchain is a way of storing information that cannot be changed. Each new block of information references the previous block and changing one box in the chain will break the whole chain and is thus impossible. It was made to make Bitcoin possible, but if current tech analysts are to be believed, it may be powering international trade and governments soon. No central authority would be needed to verify transaction information. It is all done on a shared basis.

This is the most ‘science fiction -esque’ technology we have right now. Scientists now have the ability to edit genes. To be more accurate, they have had such technologies for many years, but in 2016 a new technique called CRISPR was launched, and reduces gene editing costs considerably. This has resulted in gene research becoming much cheaper to do and has ignited new research studies all over the world.

3 Apps for Network Administrators and HelpDesk Professionals
Scroll to top