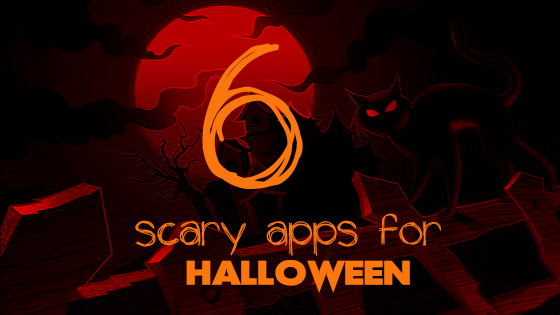 Halloween is here! It is the spookiest time of the year and we love getting into the holiday spirit. You don’t have to limit the spookiness to your analog world – there are a lot of scary apps for your smartphones that will get you in the spirit of Halloween. Here are our 6 favorite apps:

If you have never played a Silent Hill game before, then we are both jealous of you and pity you at the same time. Jealous because you get to experience one of the best horror games out there, and taking pity on you because you have no idea how scared you will be. This is a seriously scary game and we highly recommend playing it with the lights closed and headphones on. There’s nothing like lying in bed with the lights closed, playing Silent Hill, and losing any chance of falling asleep. The games’ strength lies in the fact that it doesn’t rely on jump scares. You won’t just be startled by enemies appearing in front of you suddenly (a cheap tactic used by many horror movies and games). Instead the whole vibe of the game feels wrong and keeps you on the edge.

Dead Space is another fantastic horror game that is now available for your phone. Dead Space goes for a completely different vibe than Silent Hill. Instead of a quiet creepy vibe this is one of those all out horror games. There’s violence, blood, and a lot of blood curdling screams. It works because of how well made this is. We would recommend playing this on a tablet or a phone with a big screen because the visuals are gorgeous and add a lot to the experience. Headphones are necessary as well because of the Hollywood level voice acting and sound effects in the game.

This game is in black and white and it is a great design choice by the app creators. It adds a lot to the atmosphere and increases the creepiness of the game. You play a student who wants to solve the mystery of suspicious deaths that occurred in the school which is haunted. The game is point and click but it can get very scary at times especially if you are playing with the headphones on.

Resident Evil 4 is probably the best known horror shooter out there. You will have a lot of fun fighting and running away from the many grotesque monsters that lurk the world of Resident Evil. The app is free as well which is always a plus point. The game is also fun to play and has a lot of non-scary modes too, so this is something you can play even if you don’t want to be scared.

Soul is a great app with a very intriguing concept. You have to guide a soul to heaven through different worlds and the levels are entirely hand-drawn. It gives the game a very different feel and can be very unsettling at times. Definitely recommended if you want something that makes you feel uncomfortable as well as scared.

Dark Meadows is a survival horror game you play through touch controls .The game has a very novel setting and story (involving murder-happy goblins) and the creature design in this great is fantastic. Playing through touch controls adds a lot to the experience. You will be swiping left and right as scary monsters jump at you and try to eat you up.