The prefix mal comes from the Latin for bad.  Anything with mal in it is bad news, malcontents, malnutrition, Mal Reynolds.  Now there are malnets.  Malnets are complex systems of servers and domains that are continuously on the attack.

It is estimated that this year, the majority of all spam will come from these malnet systems.  For example, Rubol a known malnet was found to have 476 unique domain names.  That’s a lot of vectors of attack.  A malnet was found to be the culprit in the MySQL.com attack.

So what do you do?  How can you protect your businesses infrastructure against such an organized malware ecosystem?

Most malnets are actually nets, malicious traps.  Don’t fall into the trap.  Rubol’s 476 domain names were fronts, mainly offering deals or quick cash.  You might be thinking only a fool would fall for a something that’s too good to be true.  However, some of these sites disguise themselves as legitimate businesses offering good deals.

The next step is to really isolate your sensitive data from the Internet as much as possible.  The easiest way to do that is move customer data onto a removable storage device.

Keeping your security software up-to-date is also a boon to the safety of your data.  And last of all, when in doubt, don’t click on it. 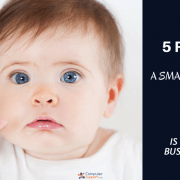 Compliance and the Cloud: Debunk the Myths

Why Choose an IT Support Company?

CFOs and CIOs can keep up with Business' growth with Cloud Computing, discovers Deloitte report

5 Reasons a Smart IT Strategy is Essential to Business Growth