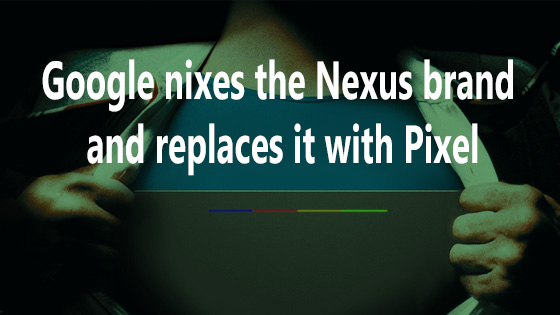 The Nexus is no more. Google’s Nexus devices have long been a favorite of Android purists. They lacked bloatware and presented Android as Google wanted it to be presented.

The signs of Nexus’s demise were evident

While this might be a shock to some, the reality is that people who had their eyes on these phones knew that the Nexus brand may be replaced; we just didn’t know what the new name would be. There were many signs showing that Google was stepping away from the Nexus brand.

Google’s IoT smart home initiative’s latest models completely nixed Nexus branding. The new tablet released by Google is also under the Pixel moniker. The Nexus launcher is still called the Nexus launcher, but there are chances that it too may be renamed the Pixel Launcher.

Many people were a bit disappointed with the specs of the Sailfish and Marlin. The disappointment stems from the fact that the devices aren’t exactly best in class. They have great specs, but that is about it – their specs are the same as the high-end devices from Samsung and other Android manufacturers. Both the devices have 4GBs of RAM, Quad-core Qualcomm processor, 8MP front camera, 12MP back camera, and both will be manufactured by HTC. The only differences among the two devices are in screen size (5 inches for Sailfish and 5.5 inches for Marlin), battery, and screen resolution (the Sailfish has a 1080p screen while the Marlin has a 1440p screen). These specs do make them powerful devices, but they aren’t game-changing.

It is easy to see why Google may be nixing the Nexus brand. It never really became a success with the public. Tech enthusiasts and people who like to stay up to date with tech news knew about the Nexus. The normal every day consumer did not have enough brand awareness. Whenever people asked what Android phone they should buy, the Nexus was recommended to them by a helpful enthusiast, but that isn’t enough.

The ground reality is that most of the public only knows about two phones – the iPhone and Samsung’s Galaxy. These are the two biggest brands in the world of smartphones. Nexus came nowhere close to any of these brands.

The launch of Pixel means that while the Nexus branding may be dead, Google is still serious about manufacturing smartphones. They are gearing up for a whole new brand launch which shows commitment and dedication towards releasing hardware. All we have right now are leaks (they may be from trusted sources but they are still leaks). We are waiting for an official word from Google.

10 years of ComputerSupport.com. Then and Now.

Top 5 Apps for a Busy Professional
Scroll to top