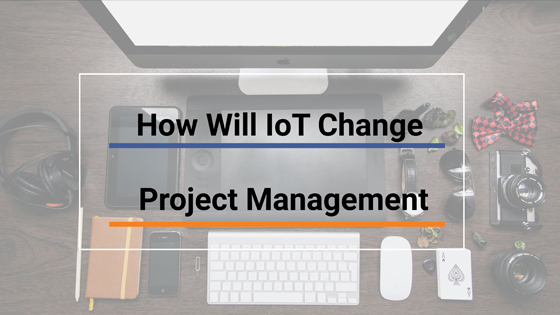 The Internet of Things isn’t just another technology – it is the next phase in technology. There have been many such phases that have revolutionized the world. This includes the invention of the steam engine, the invention of usable electricity (AC and DC), the invention of computers, the creation of the internet, cellular communications, and so on. IoT promises to bring about changes in many aspects of our lives, including project management. Project management is the art of managing a thousand different things and making them work together to achieve a goal. IoT will definitely make this task easier and better.

People don’t realize how crucial data is to the internet of things. If there are three things that are needed for the Internet of Things, they are data, communication, and sensors – and the sensors are just to generate data, while the communications are just to transmit data. Project managers will be able to gain direct insights that were impossible before. Project completion rates will no longer be guesstimates – sensors will detect how much of the project is complete. Monitoring will be much better too, and project managers will be able to accurately gauge how much time and efforts went into every part of the project.

Managing the items involved in a project is much easier than managing the people. There are huge projects that involve thousands of people. The project manager has to ensure not just that everyone knows their job, but that everyone works together, and works at their peak efficiency. IoT will allow teams to collaborate no matter how far apart they are, and help will be just a device away. Holdups due to miscommunications will be minimized, and people will be able to fix problems from a far away.

One reason that project managers will love the IoT is that it will automate a lot of the tasks in any project. Something as simple as data collection or monitoring will require no human input at all. This will mean fewer people to deal with, fewer problems due to people, and less inefficiency to deal with.

Even after a project is ‘completed’, most companies have some sort of a support agreement to help the company that the project was built for. The IoT will result in this support being extended a lot. If you install a lot of IoT devices in a project (something which is becoming more common in projects, and will be the norm in a few years) you will be expected to provide support for the IoT infrastructure. This will be a major part of the work for the next decade or two. Until in-house teams exist in every company to handle IoT, most of IoT related tasks will simply be outsourced.

This is a great time to enter the IoT industry as a businessman, as the demand for work is only going to increase. Only time will tell how much IoT will truly change us – we are sure there are many unforeseen consequences of such powerful technology.

Best Online Backup Services to use in 2017