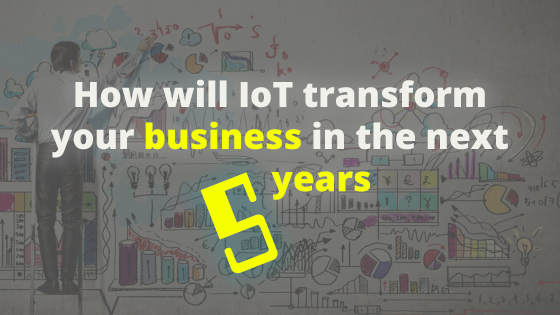 IoT is no longer a technology change looming in the future; it is here right now and the transformation of technology has begun. In the next 5 years IoT is going to change the way businesses operate. IoT devices are becoming common but many of them are still novelty items or gimmicks; that will change as IoT will be reworking the business processes around us.

We have already seen a huge reduction in workforce required to run a business. Jobs that needed 10 people previously can now be done by a single person with a computer. However, there has still been a divide between what can be automated and what can’t. Office work and documentation is done digitally but there are many jobs (such as site surveys and deliveries) that still need a human touch. With IoT and its myriad sensors, this will no longer be true. The biggest advantage of this isn’t that less people will be  part of the business, but that it will offer businesses more possibilities than before. A truck that is self-driven can easily run straight for a whole week without requiring any rest; it’s hard to beat that type of efficiency.

IoT will allow companies to receive real time data from customers and will help fix problems before they become serious issues. Rolls Royce is already using IoT to bring an unparalleled level of service to their customers. Vehicles now have sensors applied in many parts in order to indicate when they aren’t performing at their optimum level. This information is then communicated to Rolls Royce’s support team. Customers of their luxury cars get a call from Rolls Royce to inform them that a company representative will change a part that might be malfunctioning before the drivers even know there was something wrong. Such services will soon trickle down from the luxury market to becoming the norm for everyone.

IT will become an important part of every business

Internet of Things connects everything to the internet, which means that all businesses will be involved in information technology soon. Companies that made tractors are now making sensors for agriculture. As people demand more technological advancement in their products, soon companies will have to infuse technology in all of their products. Our furniture, vehicles, and more will all have computer and connectivity chips inside them. IT right now is used to run businesses these days, in the next five years IT will become the business itself for many companies.

The biggest disadvantage that technology has is that it cannot just look at a place and sense that something is wrong. Sensors help overcome this disadvantage. There are all kinds of businesses already employing sensors to do jobs that were previously done by humans. There are sensors in garbage cans that alert the waste department if they are full, there are sensors in field that alert farmers if the field needs more water, there are sensors in cities that detect pollution levels and send out alerts if conditions get too bad. Sensors are becoming cheaper by the day and within the next 5 years businesses will find all types of new uses for cheap sensors. Sensors act as a bridge between the digital and analog world; they help computers understand what is going on around them.