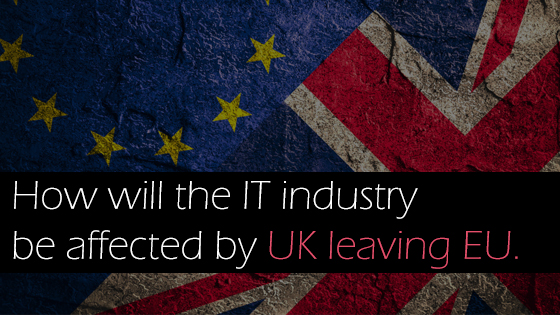 When it became apparent that UK will be leaving the EU the whole world was shocked. No one expected the leave campaign to actually win, which might be one of the reasons that not a lot of serious thought was given to its ramifications. Now that it is confirmed that the United Kingdom will no longer be part of the European Union, all industries are doing a deep analysis of what this means for the future. The IT industry is no different as the effects of Brexit are going to be huge and will change the way that IT projects are handled and even how the companies are structured.

The large impact caused by Brexit is due to one simple reason: the UK had managed to become a central part of the United Kingdom. London wasn’t just part of the European Union, it was a central location from where EU companies preferred to operate out of. This is another reason that everyone expected the Remain campaign to win – the UK and the EU have had a very mutually beneficial relationship so far.

Some of the most obvious changes that will be caused by Brexit are already emerging:

Harder to bid on EU projects

The EU allowed unrestricted business to occur across the European Union. Working with a company in the EU was almost the same as working with a company within the same country. When the United Kingdom leaves the European Union this will no longer be the case, and no one really knows how such cases will be handled in the future. The United Kingdom will have to redo all of its trade agreements with the countries around it. These negotiations and trade agreements haven’t even begun to happen yet and will probably take many years. This means that if a company is headquartered in UK then it will be much harder for them to bid on any projects in the EU. EU government projects will be almost impossible to bid on once the UK has formally left the EU. This means that a whole revenue stream for companies in the United Kingdom will be coming to an end.

Harder to get the best talent

A big reason that the United Kingdom voted to leave will also be a big problem for all UK companies. Many people had a problem with ‘immigrants’ from other EU companies freely coming in to the UK leading to lesser jobs being available for local residents. The UK was a prestigious part of the EU and attracted some of the best people from all over the union, allowing UK companies to have an advantage over the other countries in the EU. Once it becomes harder for people to move to the UK then they are going to stay in countries that are still a part of the EU.

This is going to be one of the biggest headaches for the IT sector – sure, it becomes harder to hire people from other countries, but what happens to the people already working in the UK? These people were allowed to freely move and work within the EU. Many companies have hundreds of employees whose work status is now up in the air. No one knows what sort of an agreement UK will reach with EU countries and what will happen to the people already in the UK under EU laws.

This is going to be the biggest blow for people looking for work in the United Kingdom. People will not want to invest in the United Kingdom anymore which means no new jobs. Many people scoff at this idea because it seems strange – the UK is still a very strong country and economy, why would people not want to invest? The answer is simple: Uncertainty.

Nothing drives away investors like uncertainty. Will you be willing to put in your money if you didn’t know how it would turn out? UK will have to renegotiate trade agreements, immigration laws, and pretty much everything else about how its businesses operate within and outside the EU. This will take years and until the negotiations are complete no one knows what the future holds. Once the negotiations and talks are complete people will start investing in the United Kingdom again but until then it’s best to lower our expectations.

How Microsoft Planner can lead to more productive work environments

How will Virtual Reality affect our way of doing business?
Scroll to top