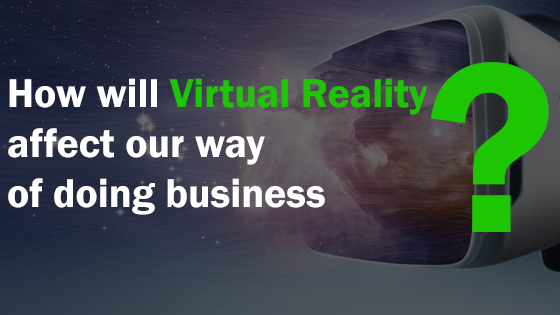 Virtual reality is finally here. We have been seeing examples of virtual reality in science fiction for a long time and there have even been some products which gave people a taste of what VR would be like. However, now there are two consumer devices (Oculus’s Rift and HTC’s Vive) which deliver a real VR experience. Right now virtual reality is being treated as a novelty item and it is easy to see why. Every technology starts this way; expensive devices which show great promise, if not greatness right now then greatness for the future.

Virtual reality is great for entertainment, however it will grow to be much more than just entertainment or novelty. We are in the beginning stages of VR and this is the perfect time for businesses to jump in and gain a foothold in the market. It is important to understand the implication of VR and how it might turn out to be a profitable venture for businesses.

Entertainment is king on VR

There is a huge boom in companies creating entertainment for virtual reality. VR media is unlike anything else people have experienced before; you truly feel like you are in a different world when you put on the VR goggles. Most entertainment available right now for VR consists of simple games and demos of what the technology can offer. Companies are still watching the VR sector closely to make sure that people are interested in it before they make big investments in the field.

VR entertainment doesn’t have to be just games; it can also consist of much more, such as music and exploration. Imagine being able to visit different worlds and you will see the immense potential present in VR. Companies can make virtual environments based on real environments like the top of the Everest Mountain, on historical environments like France during the French revolution, or even imagine completely new environments and allow people to explore.

VR allows people to see what things would look like before they buy them. Many companies are investing in creating VR catalogues which allow people to try their products before they buy. Clothing retailers can allow people to see how they will look when wearing the company’s clothes, car companies are creating catalogues showing people how it will feel to drive in the car, and much more, all without the customer having to leave their home. Many people say that one bad thing about online shopping is that you don’t really know what the product will look like until it arrives – VR promises to change that.

Buying a house is the biggest investment most people make in their lives and VR is going to totally change how it happens. People will now be able to actually see what their house will look like before the construction even begins. Imagine a whole family walking around a virtual house and giving pointers to the architect or the construction crew about what can and should be changed. Architecture will also become much better because instead of just looking at a model and imagining what the final product will look like, architects will be able to walk in the buildings they dream up and make improvements. Don’t be surprised if you start seeing buildings and projects unlike anything ever seen before because they were aided by VR.

VR is, for now, mostly limited to media related companies. The one place where every type of company will be able to benefit from VR is marketing. VR will allow companies to literally put people within advertisements. Advertising has always been a huge industry in any field on technology – just look at the size of the internet advertising industry or the social media advertising industry. VR marketing experiences will allow companies to create beautiful experiences for customers which will create emotional connections and attachments in the hearts and minds of the customers.

Marketing in VR is just a matter of time; once enough people are using VR devices VR will become the premier marketing channel for most businesses. Instead of just a billboard or a pop-up ad, companies will be able to immerse consumers into their ideas.

How will the IT industry be affected by UK leaving EU

5 Great Use Cases for Azure
Scroll to top