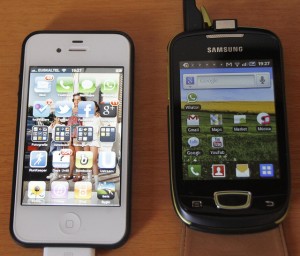 One of the biggest benefits to iOS by far is its apps. Last fall, the company announced that it had surpassed one million apps, meaning that users can find anything they need within the iTunes Store. What does this mean for a business? Smaller businesses are more likely to find the productivity and communication apps they need, which means they’ll be able to do more for less money. Any business that plans to operate on cloud-based apps will likely find iOS better than Android. Even businesses having apps custom designed will likely find it easier to locate and hire iOS developers than Android developers in the current environment.

In a cloud hosting environment, the ability to share files and documents is crucial. As anyone who has ever used an iOS device knows, sharing can be challenging, to say the least. Moving documents from one device to another often requires either connecting to iTunes or emailing the document, which can be labor intensive. With Android, sharing documents is much easier, with users having the ability to share content through any app that has sharing capabilities.

These major benefits show the strengths of each O/S in a work environment. Since the user interfaces are so dramatically different, while at the same time similar in functionality, a business must prioritize whether sharing information or access to apps are most important and choose the best smartphone within those priorities.

3 Tools for Troubleshooting Your Own Computer
Scroll to top